INDIA is big in every way: size, population, personality and has been captivating visitors for millennia. India is the birthplace of Hinduism, Buddhism, Sikhism and Jainism. Its name conjures images of crowded streets, colourful spices, textiles, ancient temples, forts and more.

The regions across this epic land – from the mountainous hills covered with temples in the northern states to the bustling beaches and lively nightlife of the south coast – have their own culture and rich histories that entice visitors to return again and again. Whatever you are looking for in India, you’ll probably find it in the south-eastern state of Tamil Nadu. The state has an array of temple towns, including historic Madurai – one known as “the Athens of the East” and Thanjavur. Former French colony Puducherry has a district Gallic ambiance, while the stone-carved Mamallapuram is a UNESCO World Heritage Site. For a taste of nature, Tamil Nadu has a long stretch of coastline and a large section of the lush Western Ghats.

India: One of the world’s oldest civilisations, with the first sophisticated urban civilisation emerging in India in 3300 BC. Known as the Indus Valley Civilisation, this culture stretched across large swathes of north India. Around 1500 BC a group known as the Aryans, moved into the Indus region. Their Vedic religion contained casted division, which put the Brahmins (priestly class) at the top of the social hierarchy, followed by Kshatriya (warriors), Vaishyas (treaders) and Shudras (labourers), it was partly as a reaction to this that new religious movements emerged, including Buddhism and Jainism. Siddhartha Gautama (566 BC), who became the Buddha, was born in Lumbini. Mahavira (467 BC), the founder of the Jain religion, dies. The first major dynasty in India, the Mauryan Empire, was established in 322 BC when Chandragupta Mauryan defeated the ruling Nanda dynasty of Magadha. Chandragupta’s grandson Asoka (269 – 232 BC) became one of India’s greatest rulers, eventually expanding the Mauryan Empire from Southeast Iran to Assam in the east. After his bloody conquest of Kalinga, Asoka gave up violence and became a great patron of Buddhism. He had his ethical code recorded in Prakrit, Greek and Aramaic on rocks and pillars all over his vast empire. In 326 BC, the forces of Alexander the Great invaded the Indus Valley, reaching as far as the Beas River in what is now Himachal Pradesh, while from the northwest a series of invaders from Central Asia established successive dynasties. These included the Indo-Greeks from Bactria (200 – 80 BC), the nomadic Indo- European Scythians or Sakas (from 80 BC), the Parthians from what is now Iran (1st century AD) and the Kushanas, Indo-Europeans from Bactria (AD 50 – AD 300). The decline of the Mauryans led to the rise of the Kushanas whose empire linked the Indian Ocean to the Silk Road, Kanishka, the greatest Kushana king, was almost as great a patron of Buddhism as Ashoka had been. As the Kushanas declined, the Gupta empire (AD 320 – 500) emerged and presided over a great culture flowring, including the establishing of the university at Nalanda. The Guptas were superseded by the Vardhanas, based at Kanaut their most famous king was Harsha (AD 606 – 647). In central India, the Mauryan were supplanted by an empire like the Satavahanas (100 BC – AD 200), based at Paithan in Maharashtra and the Ikshvakus (AD 225 – 310) to the east, under whom Buddhist stupas were built at Amaravati. Many superb sculptures and paintings at Ajanta were made under the Vakatakas (AD 250 – 550), while a subsequent dynasty. Chalukyas built temples at Badami and Pattadakal.

In the 8th century, the Rise of Rajputs, The Harsha’s old capital Kanauj became the site of a three-way power tussle between the Pratiharas who ruled Gujarat and Rajasthan, the Rashtrakutas who rules Karnataka and Maharashtra and the Palas, a Buddhist dynasty from Bengal. Finally, around 836, the Pratiharas-who were one of a group of warlords known as the Rajputs, prevailed. Other Rajput dynasties included the Paramara in Ajmer and the Tomers of Delhi. These dynasties fought frequent wars with each other, but between wars, the rulers lived in great luxury, in grand forts and richly ornamented palaces. The origin of the term Rajput is the word reajaputra (หรือ “ราชบุตร”), which translates to “son of King”

Southern Dynasties, the Pallavas, based in Tamil Nadu, rose to power in the 6th century. In AD 642, their ruler Narasimha Varman I defeated and killed the Chulaka King Phulakeshin II, and the great Chalukya kingdom fell apart. In the late 9th century, the Chola defeated the Pallavas, Mysore’s Western Ganga dynasty and the Pandyas of Madurai to establish supremacy in the south. International trade flourished, despite the constant wars. From the 7th century, reforms in Hinduism rejecting the casted system led to its resurgence and the wane of Buddhism’s influence.

“TAMIL NADU” A soulful state awash with religious cities and temples, Tamil Nadu was the cradle of ancient Dravidian culture, whose language forms the basis of many of the main south Indian language today. It extends from the Coromandel Coast in the east to the forested Western Ghats in the west and at its heart is the fertile Kaveri valley, a land of rice fields and spectacular temples. This valley was event is the site of ancient Cholamandalam, where the Chola kings built magnificent temples at Thanjavur and Championed a renaissance of religious Hindu art, particularly sculptures.

Many towns in Tamil Nadu have the prefix “tiru”, which means sacred, and indicates the presence of a major religious site. Great temples stand at Madurai and Chidambaram, which witnessed a flourishing of dance, music and literature under their enlightened rulers, as did the 7th century Port-city of Mamallapurum, which has spectacular rock-cut temples. Unlike many states, Tamil Nadu was subject to both French and British colonial forces-The French ruled in Puducherry from the 17th century and Tamil Nadu’s capital, Chennai, was one of the most important cities for first the British East India Company and then the Raj.

(Chennai, formerly known as Madras, is the state capital of Tamil Nadu. The city was once a group of villages set a mid palm-fringed paddy fields, until two British East India Company merchants, Francis Day and Andrew Cogan, established a factory-cum-trading post here, a fortified settlement that came to be known as Fort St. George. Outside its walls was George Town, whose crowded lanes, each devoted to a particular trade, serviced the British colonists. Colonial rule linked the various villages, including the settlement founded in the 16th century by the Portuguese at San Thome, the sacred site associated with St. Thomas the Apostle. Several centuries before the Europeans arrived, the great 7th century Pallava port was in Chennai’s Mylapore neighborhood, its Kapaleeshwarar Temple, along with the Parthasarathi Temple at Triplicane, bear testimony to the city’s antiquity. Colonial rule marked the beginning of the city’s growth as a major commercial centre. Today, Chennai is a dynamic mix of old and the new, its stately colonial structures juxtaposed with modern high-rises.)

The Siam Society will arrange a nine-day study trip to explore magnificent historical sites in the state of Tamil Nadu in Southern India, under the leadership of Khun Euayporn Kerdchouay, Senior Consultant of The Siam Society.

Contribution of THB 85,000 (THB 88,500 for non-member). Single room surcharge of THB 23,000. A deposit of THB 20,000 and a photocopy of the identification page on your passport must accompany the booking. Your reservation will be confirmed as soon as the deposit has been made. Payment in full will be required 30 days before the start of the trip (i.e. by Wednesday, 21 December 2022). Please pay by cash or cheque payable to “The Siam Society”. Transfer can also be made to The Siam Society travel account at TMBThanachart Bank (ttb), saving account no. 053-2-18000-7 or by scanning the QR code on your right. Once payment has been made, please fax or e-mail the deposit or transfer docket to us. 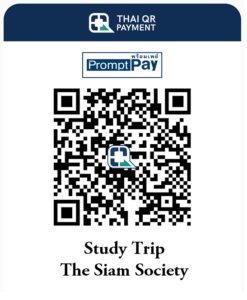 Please note that the flight itinerary between Bangkok-Chennai-Bangkok mentioned in the programme only serves as a suggestion. Trip participants are free to travel with their select airline of choice in traveling to Chennai and their return to Bangkok.

Due to a lower number of worldwide infections, many countries have relaxed their travel restrictions and quarantine requirements in regards to Covid-19.

Nevertheless, when traveling as a group, The Siam Society would like to remind you of the following measures that we have put in place:

– We kindly ask that our trip participants perform a self-administered ATK test prior to the commencement of the trip. Participants are also asked to carry along with them multiple sets of ATK test kit, along with their preferred set of medicines (for consumption if infected with Covid-19.)

– Those tested positive with severe symptoms shall be treated in accordance with the health measures stipulated by the local government. Medical costs in excess of the insurance coverage shall be at the expense of trip participant(s).

– Our staff and local tour operators will constantly provide you with the latest update on local health and safety regulations.

Thai passport holder and foreign nationals will require a visa for entering India. However, visitors can apply for an eVisa via an online application, which is the most convenient option and can be completed from your home.

For more information, please follow the link below:
https://indianvisaonline.gov.in/evisa/tvoa.html