The Honorary Editor (and Editor-in-Chief) of the NHBSS is an appointed member of the Council of The Siam Society and edits the NHBSS with the help of an appointed, international editorial board. The Society strives to publish two issues per year. The NHBSS is available in printed form on a complimentary basis to all members of The Siam Society, and to non-members by subscription or purchase. The complete contents of NHBSS issues from 1914 to the latest issue are available in PDF format at the link below.

In its earlier form, the NHBSS primarily published articles on traditional natural history, as the fauna and flora of Siam and its neighbouring countries were only beginning to be described and inventoried. While the NHBSS is still eager to publish original natural history observations, its contents have since broadened to natural history including ecology, taxonomy, systematics, biogeography, evolution and geology, environmental science and conservation biology, natural resource management and other related fields of relevance to Thailand or Southeast Asia. The Siam Society has become more focused on how to safeguard and preserve the cultural and natural heritage of the kingdom in the face of rampant economic development and destruction, and to get the public to appreciate and understand this natural heritage.

The NHBSS is a peer-reviewed journal and indexed in BIOSIS Previews, Biological Abstracts, the Zoological Record, and Scopus.

Potential contributors may check information on submission in the latest version of “Instructions for Contributors to NHBSS” (click here). Editorial correspondence and manuscripts for submission may be sent to the Honorary Editor, Natural History Bulletin of the Siam Society, at the postal address below or alternatively by e-mail to Dr Prachya Musikasinthorn, Honorary Editor (Editor-in-Chief) of NHBSS, at musikasinthorn@gmail.com. 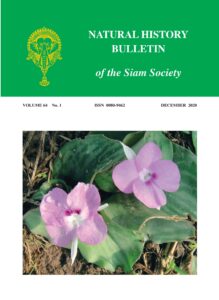